The Scientific Community: Creating a Language to Deal with the ‘Everyday Geopolitics’ of Neoliberal ‘Transition’ in Post-Socialist Serbia

In this article, I focus on the ways in which a particular group of people – astrophysicists in Belgrade, Serbia, alongside whom I conducted a year of ethnographic fieldwork in 2008 and 2009 – responded to the collapse of the Socialist Federal Republic of Yugoslavia. I argue that the conditions and effects of neoliberalising processes occurring in economic centres of the global world system affected scientists in Serbia before neoliberal modes of governmentality surfaced in this state. I pay particular attention to a trope I often came across, namely the reference to a supranational ‘scientific community’. I consider how this term was mobilised with reference to the context of scientific and economic isolation during a portion of the 1990s, when a trade embargo and sanctions preventing formal international collaborations shaped scientists’ everyday experiences. Yet, I argue, isolation also reflected the uneven distribution of opportunities for scientific endeavours emerging out of global neoliberalisation processes and resistance to them. Opportunities reached scientists in various parts of the former Yugoslavia at different speeds, a situation that was experienced as a hindrance for many scientists committed to living and working in the region. It is against this historical backdrop of isolation that I suggest scientists began to invoke their belonging to a supranational ‘scientific community’.

Andrew Hodges holds a PhD in Social Anthropology from the University of Manchester. He has conducted ethnographic fieldwork over eighteen months in 2008â€“9 with scientists in Belgrade, Serbia, and Zagreb, Croatia, analysing their experiences of post-socialist â€˜transitionâ€™ and economic crisis. He also has a strong interest in social activism and the relationship anthropology has with activist involvements of various kinds, participating in antifascist initiatives in Serbia and Croatia. 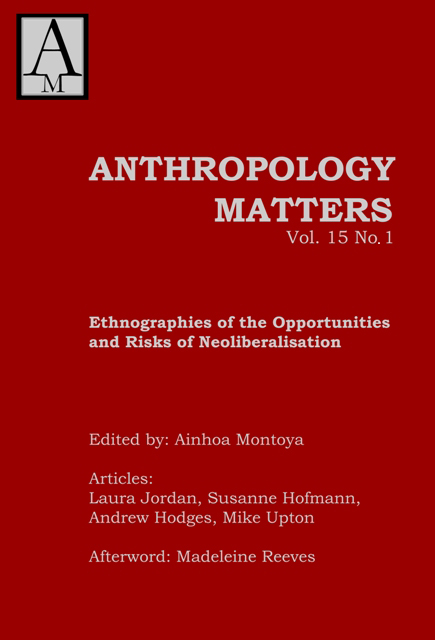 Vol. 15 No. 1 (2014): Ethnographies of the Opportunities and Risks of Neoliberalisation

Anthropology Matters uses the Attribution-NonCommercial-NoDerivatives 4.0 International (CC BY-NC-ND 4.0) license. Individual contributors retain non-exclusive rights to their published material and may reproduce their contribution in whole or in part and use it as the basis for future articles, book chapters, or other works.